Dietitian’s organisations frequently criticise low carbohydrate diets for not being proven safe in the long term. Poorly controlled diabetes (where blood glucose is higher than for people without diabetes) on the other hand, has been proven extremely unsafe in the medium to long-term.  For people with diabetes, a restricted-carbohydrate diet is almost certain to lower blood glucose and remove or eliminate medications. This one ‘radical’ diet change can hardly fail to alleviate most of the ill effects of diabetes, medicinal side effects and both of their risks. Clearly, the ‘unknown risk’ of the low carbohydrate diet in the long term can be weighed against the near certain risks of diabetes. Otherwise, blindness, amputation, cardiovascular disease, dialysis from kidney failure and a shortened lifespan will nearly always be the end result.

I have now passed eighteen months on a low carbohydrate diet. That means I have exceeded the 74 weeks of the ‘best’ vegan diet study by Barnard. I thought it was time to wrap up the comparison and reflect on my health progress to see where my health journey could now go. That is the focus of this post.

Let’s get straight into that with an update to my HbA1c chart.

At the end of August, I was a little disappointed. The downward trend ceased and my result was actually 0.1% higher than in May. This was mitigated by the fact that the result is only accurate to one decimal place anyway and the later result in December came in again at 5.6%. All these results are still in the non-diabetic range. I still take 500mg of metformin as this remains beneficial to further recovery despite having non-diabetic blood glucose. That can be compared with 2000mg of metformin, Januvia and Diamicron before low carb.

Unlike the conventional and vegan diets in the trial, my blood glucose has stabilised and not led to an increasing HbA1c after three to six months that sustains and increases medications. Compared to HbA1c population statistics, it is about four standard deviations lower than the vegan diet and that is maintained on a minimum amount of metformin- unlike the more heavily medicated study participants.

Finally, my ending HbA1C is about ten standard deviations less than the vegan study statistics. Statistically, it is practically impossible for any of the 49 vegan (or 50 conventional diabetes diet) participants to have achieved a similar result.

It is important to realise that HbA1c is really only an average. Large fluctuations up and down can still give a good average but have the considerable risk of complications due to glycaemic variability. My blood glucose measurements have a standard deviation of an excellent 0.8 mmol/l and the tight glucose control that a low carbohydrate diet gives can be seen below. I have a normal non-diabetic HbA1c with low glycaemic variability. My blood glucose measurements were 98% within target showing tightly controlled blood glucose. Such is the efficacy of carbohydrate restriction for diabetes. 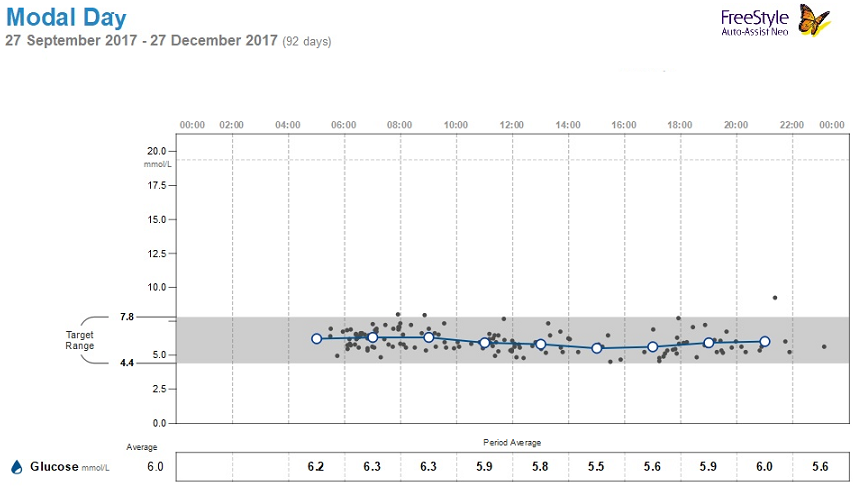 You can also see the effect of one inadvertent meal which included carbohydrates at my daughter’s graduation function. Refined carbohydrates are insidiously a part of our food supply and no one is perfect!

Unfortunately, with very high blood glucose, I had just about every bad effect from diabetes that researchers have shown. So how is my health after eighteen months on a ‘fad’ diet of unprocessed foods low in refined carbohydrates and no ‘healthy’ whole grains?

But not everything is the same. I do have one negative. I am more prone to constipation which I almost never suffered from before. This is almost always a problem if I do not hydrate properly. Looking at the list above, I sure can live with that!

Quite bizarrely, the Dietitian’s Association of Australia cited (without evidence) that the low carb diet should not be used for diabetes because the health of other family members could be impacted. Would they make that comment for a coeliac? Nonetheless, I can report that when we have meals, the family generally eats the potatoes or carbohydrates and I have a different vegetable. If only I could get my children to avoid processed foods, skip the fries and stop asking for sugary drinks completely like I do! It seems that is even beyond my powers as a role model. However, because of my eating requirements and awareness, we have less refined carbohydrates and processed foods and my children have reduced their sugar intake. Maybe they meant that they didn’t want anyone’s health to improve?

When I go out to eat, I rarely have a problem finding something. If there are carbohydrates, I usually can get another vegetable substituted.

This is otherwise an unremarkable non-issue.

In late September, I had my metabolism measured by Metabolic Health Solutions (MHS). In full disclosure, this was done for me at no cost. I had not understood before how metabolism, weight loss and diabetes tied together. Now I think I do!

My testing showed that my Resting Metabolic Rate (RMR) was 2145 kcal which is towards the top end for my age and body. That is good. It explains that I have the metabolism to potentially lose weight without vigorous exercise. My efficiency (FEO2) was 17.3% confirming that I am no athlete as it would be optimal if less than 15!

Very surprisingly, the test showed that my fuel mix was 24.7% from fat and 75.3% from carbohydrate. This surprised me as I thought that, being on a low carb diet, I would automatically be a good fat burner!  Ideally, this should be almost opposite with 80% fat burning and 20% carb burning.

It seems my metabolism is more than happy burning carbohydrates from protein.  It does explain why I generally have had trouble losing weight and still have trouble. Clearly, if one is a good fat burner and does not eat a lot of fat then one will burn body fat. Being a carb burner fully explains why, when I went on a slightly higher fat moderate protein diet, I stalled. Even though it was low carb, my body was still getting most of its energy by making glucose from protein.

Solutions for me include some longer fasts, a more ketogenic diet to encourage fat metabolism, and exercise.

Since that testing (and to be transparent as my blog is non-commercial) I have begun working with MHS because I am impressed with how this information can inform your weight loss and metabolic health strategy. The world has a lot of metabolically sick people.

Where to From Here?

It is still my aim to achieve an HbA1c of 5.1% or below. As I indicated in my last post, control theory would indicate that I am unlikely to achieve that on the current trajectory. The steady progression downwards has arrested and I am about one standard deviation from the target. I do want to lose further (fat) weight. I must change my approach or it seems I will always be above the setpoint or take a very long time to reach it. My sleep patterns are pretty good and my diet is working well. I am still doing only a little exercise. Here are some options.

Presently my diet has quite a bit of protein in it. This does not raise my blood glucose as carbohydrates do but it keeps me out of ketosis a lot of the time. By operating more deeply in ketosis, my blood glucose would fall markedly more and I would likely achieve my 5.1% HbA1c. That means a higher fat diet. If I limit my protein I will also have reduced capacity to burn carbs (presuming I can spare muscle) and this may help me become a better fat burner.

I enjoy the higher protein low carbohydrate diet. I do not see a ketogenic diet as a long-term option for me since it more difficult to get sufficient nutrient density on a high-fat diet- but this might be something I do for a while if it helps me to become a better fat burner.

Most days I fast 16:8 by skipping breakfast. By extending this I can cause my metabolism to use my own body fat since while fasting it will not have carbohydrates, fat or protein from diet and should prefer to use my own body fat. As a 75% glucose burner, I need to be careful that my body does not decide to obtain glucose by catabolising muscle until I can change that.

I do not exercise much and have exercised little over the 18 months. Among other things, I wanted to see how far I could go with diet and did not want to confound diet and exercise. By building more muscle and doing high-intensity exercise I should be able to deplete my glycogen more easily and frequently, leading to a reduction in average blood glucose, as well as increasing my insulin sensitivity. High-intensity exercise will also be helpful, combined with fasting or a keto diet to reduce muscle loss, and help me to become a better fat burner.

To be honest, I have never been a marathon runner and likely never will be, so part of my challenge is to find the exercise that I will enjoy.

Having some real numbers from metabolic health testing has allowed me to focus on what I can do to improve my metabolic health. I am now more motivated to exercise and then be re-tested to see how I have improved.

A Note for Vegans

Sorry, but in my case, it was no contest. A vegan diet can (without question) improve your health if you are obese and have diabetes mainly by its calorie restriction, but Barnard’s study compared with my journey shows that it is neither as sustainable nor as optimal for me as carbohydrate restriction when compared against the study people. I went the distance of 78 weeks versus the study’s 74 weeks and it is “Game Over”.

Shouldn’t I be dead by now from the ‘fad’ diet?  In fact, if I had listened to you I might have been well on my way to dialysis or amputation. I think you need to get over your prejudice against low carbohydrate and higher fat diets. After all, despite some health-washing to make the much-lauded Mediterranean Diet appear as a low-fat diet- it is actually also a high-fat diet.

It is without question for me or my doctor that a low carbohydrate approach has led me to vastly improved health and a reversal of diabetes. If you have any real semblance of taking an evidence-based approach, that should also be obvious to you. You say that your members deliver services that are not ‘one size fits all’ but in practice if you have dietary guidelines uniformly applied to everyone (sick and healthy) it really is lip service!

More importantly, when you get medically and metabolically tested, it is well apparent that your dietary, exercise and eating must be individualised to optimise your metabolic health and that it is likely to change over time. It is reprehensible that dietitians are not systematically identifying the people for whom a low carbohydrate diet is beneficial and helping them with an individualised journey.

It is a shame that you (dietetic associations) keep your members in the Dark Ages of dietetic practice. I suggest that if you don’t change then consumers should figure it out for themselves and vote with their feet.